I originally posted this Wander almost exactly four years ago, when the Olympics were in full swing in Rio, the world celebrating together as it usually does. However, although the 2020 Olympics were scheduled to take place this month, things are much different. The Tokyo Olympics have been postponed until next year, but even that hasn’t been confirmed, as we live in such uncertain times. It’s such a shame, and I really feel for the athletes who have been working towards this for so long. I’m not much of a watcher of sport, but there is something about the Olympic Games that captures my imagination, and I find myself caught up in the atmosphere and excitement of it all. Therefore, as we have no Olympics to celebrate this year, I thought I might revisit a Wander that takes us to where the modern Olympics began… 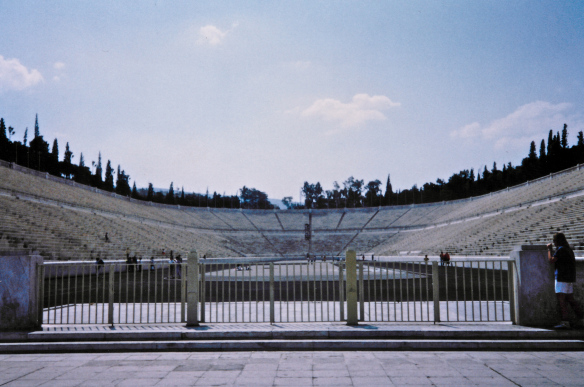 I thought it might be fun this week to wander to Greece, where the Olympics began. Now, this is obviously not a stadium built for the 2004 Athens Olympics – rather, this is the Panathenaic Stadium, where the first modern Olympics were held in 1896.

The stadium, interestingly, was built on the site of an actual ancient Greek stadium, thought to have been constructed in around 330BC, for use at the Panathenaic Games (hence the name). This was a religious and athletic festival held every four years in honour of the goddess Athena, the patron goddess of Athens. The stadium was used for several centuries before being abandoned, then rediscovered and excavated in 1869, before being refurbished for the modern Olympic Games. 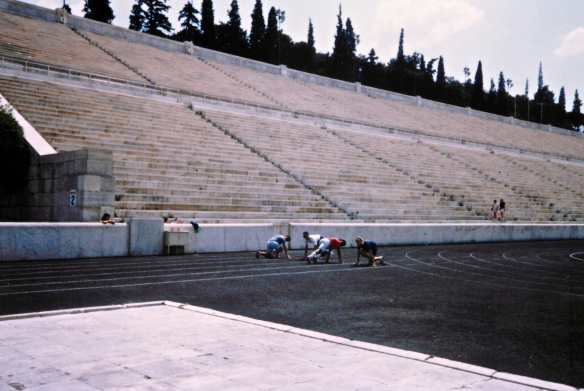 Here are some of my travelling companions, attempting to start a race… or something.

When the Games returned to Greece in 2004, the old stadium once again came to life, hosting several events. It’s also the place where the Olympic Flame is handed over to the host country, so holds a very special place in Olympic history. As Rio draws to a close, it’s nice to wander back to where it all began in the modern era – thanks for coming along with me.